TALES FROM THE SUITCASE

On The Book Trail

WRITING a book, it seems, is the easy part (hint: it isn’t easy at all).

What follows in comparison involves multi-skilling of the highest order (my wife would dispute utterly my ability to do this in any shape or form) a high tolerance for late nights followed by early mornings, a good suitcase and a whole gander bag full of smiles and, signatures, handshakes and bonhomie.

My new book is born.

Around The World In 80 Cigars – The Travels Of An Epicure tells a few tales from my 25 years as a roaming writer, taking in adventures in a minefield in Bosnia, the Sahara Desert in Tunisia, the tobacco plantations of Cuba, Nicaragua and the Dominican Republic alongside salmon fishing in Scotland, cruising in a hot air balloon over the vineyards of Cognac and having a tug of war with a crocodile in the Limpopo River.

It points out how my love of a handrolled smoke has pin pricked all these little moments of travel, adventure, occasional danger and dread and lots of fun and laughter in my life. And with a mighty launch affair conducted at the magnificent Oriental Club in Marylebone, we were off and running.

As I say, writing the book is fairly straightforward. Plan your destiny, work out your rough direction, set forth and finish in time to meet your publisher’s deadline. Simple. Yet now I have to face the trail of signings and talks, shop appearances, tradeshows, publicity, magazine reviews and more in order to get the beloved book in front of as many people as possible.

I’ve spent hours in London cigar merchants; signed hundreds of books; travelled to Germany to woo potential international distributors; faced the inevitable wave of keyboard warriors; and given the book an enormous push to start it off on the slopes, where I hope it will pick up speed and career ever downwards in a heart-stopping dash to literary stardom.

I am also realistic. If I can sell out of first print and be in a position to consider a reprint, I’ll be happy. A few much-needed days at home to recalibrate have followed, although there’s still plenty to be done and I have treks to the Orkney Islands and Mexico looming on the radar.

All of which is good, if tiring, and grist to the writer’s mill. There must always be something new to write about, someone new to talk to, something else to marvel at and new places to explore. Everything I do comes from a place of inquisitiveness and that’s what I tell wannabe writers and journalists when I meet them or when I’m asked into schools to give a talk to youngsters. The most important thing a writer can have is an inquisitive mind. Without that you’ll never ask the right questions anyway and you’ll not be curious enough about the world around you.

Keep looking at the world through fresh eyes, is my advice, if you know what I mean. And I’m hoping for at least one good clear night way up north so that the family and I might, just might, catch a glimpse of the Aurora Borealis.

Be among the first in the world to try the unique new Oriental Cigar Gin.

Luxury label Leggets have collaborated with Nick on a series of new projects for the epicurean traveller, cigar lover, outdoorsman and ...read more

A LOT – and when I say a lot, I mean a lot – has been happening over the last few months. I suspect you’ve noticed. I can’t quite ...read more

On The Book Trail

WRITING a book, it seems, is the easy part (hint: it isn’t easy at all).What follows in comparison involves multi-skilling of the highest ...read more

The fair city of Verona. 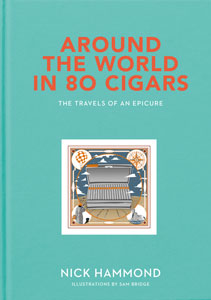